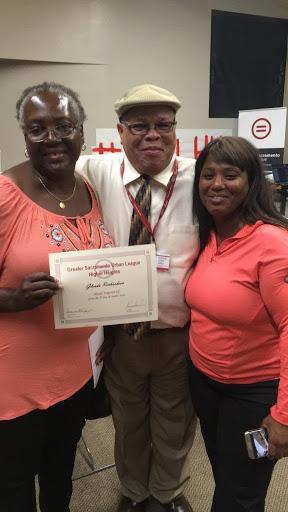 Shamerra Glover and Glenda Richardson chat together like they have known each other for years, like maybe they are even somehow related to one another.
The truth is that Shamerra and Glenda only just met each other under a year ago when they both started taking classes to complete their high school diploma at The Greater Sacramento Urban League (GSUL).
Although their friendship has been short-lived so far, the growth and development they have experienced in their year at the Urban League has made them both very close.
“Look, when I started at the Urban League I had a third grade level of math,” Glenda said. “And now I do math to relax, just like how some people knit, well I do math now.”
Shamerra laughed, and said, “It’s true! She was doing math just the other day when I called her and I said, ‘You’re doing what?!’” Surprisingly, both Shamerra and Glenda only accidentally stumbled into the high school diploma completion program at the Urban League.
Shamerra was trying to finish up her Certified Nursing Assistant (CNA) Certification when she was faced with a check-list of items she needed to bring to her state board exam, which included her high school diploma. “I was just thinking, ‘Now how am I going to get around this?’” Shamerra laughed. “I would contact schools for their GED programs and then they would be like, ‘Okay and that will be $50 an hour.’ All the schools I looked at were costing so much money.” Fortunately, Shamerra was directed to the Urban League where her education had no cost.
Likewise, Glenda began the high school completion program because she had wanted to take computer classes, but was required to finish her diploma first. Neither of the women had planned on completing their high school diploma, but neither of them could put a finger on why they quit high school in the first place either. “I don’t know…recess,” Glenda said. “Went out on the playground and just didn’t come back in.”
Although these women may have wanted to fall back into recess during their studies at the Urban League, their teacher Mr. Greene would not let them. “One day a representative from American River College came over and Mr. Greene said everyone was going downstairs to meet with the representative, and I said I didn’t want to go,” Glenda said. “Look, I’m fifty-something years old. I don’t care about what they’re doing. I don’t even know why I’m here,’ I said. And Mr. Green didn’t budge, he simply repeated, but this time slowly, ‘Everybody is going.’”
In fact, Glenda said she nicknamed Mr. Greene in her time at the Urban League “Mean Greene.” “Mr. Greene is rough, and he is hardcore, but he is a wonderful teacher, and he doesn’t let you slack,” Glenda said. “He makes you go to the board, even if you don’t know what you’re going to do at the board, but when you leave the board, you’re going to know what you’ve done.”
Many of the students at the Urban League contribute their success to Mr. Greene’s teaching style and encouragement.
“Even in my high school years, I never had a teacher like him, who takes his time and is so dedicated to his students,” Shamerra said. “And a teacher who is so confident about his students. He would always say, ‘You are gonna pass,’ or ‘You are gonna get this.’”
It was Mr. Greene’s confidence in his students that incited the desire for more learning on behalf of both Shamerra and Glenda.
Shamerra will be moving on to complete her state board exam for the CNA certification, and Glenda has decided to pursue a career in drug counseling. On top of that, these wonderful women will be returning back to the Urban League on occasion to volunteer their time as tutors to other students. “This group of graduating students was really encouraging for everyone to see because we have all these different age groups in our class,” Glenda said. “My niece is graduating with me and she’s 23 and I’m 55, and we’re all doing it together.”